That study coincided with YCominator's 10th birthday. This year YCombinator turns 15. So let's take the opportunity to revisit the economics of incubators

In that post we discovered the probability of achieving an exit for a start-up graduating from the program dramatically reduces after the first 2 years of operations.

We also concluded the Incubator Factory Complex was not about reducing the rate of failure as a pathway to achieving success. It was all about amplifying it.


So has anything changed?


There is no doubt that YCombinator has radically changed the why the world thinks about germinating ideas into business models… But what about the efficiency of the model?

Are start-up incubators still a recipe for failure? Or, has time proven the original study to be wrong?

Is the model today significantly better than the old Venture Capital seed investment model it professed to disrupt?

The authors created a sample of 138 liquidated U.S. venture capital funds and investigate the outcomes of their 4,549 portfolio companies.

In their sample 19% of portfolio companies exited through an IPO, 7% through a sale of listed equity, and 23% through mergers or acquisitions (Basically 49% achieved an exit. Just over half being IPO’s)

The average number of portfolio companies of this group was 33 with an average life of 15.4 years

If we include a forecast the potential IPO’s of the remaining companies in the portfolio (e.g. AirBnB & Stripe) we discover that about 2% of the portfolio may achieve IPO status.

This suggests the YCombinator innovation model is about 10x less effective at unearthing IPO’s than the traditional Venture Capital seed investment model.


But what about YCombinator’s ability to achieve any type of exit?

This would place YCombinator in the bottom 15% percentile of the 2005 research sample. 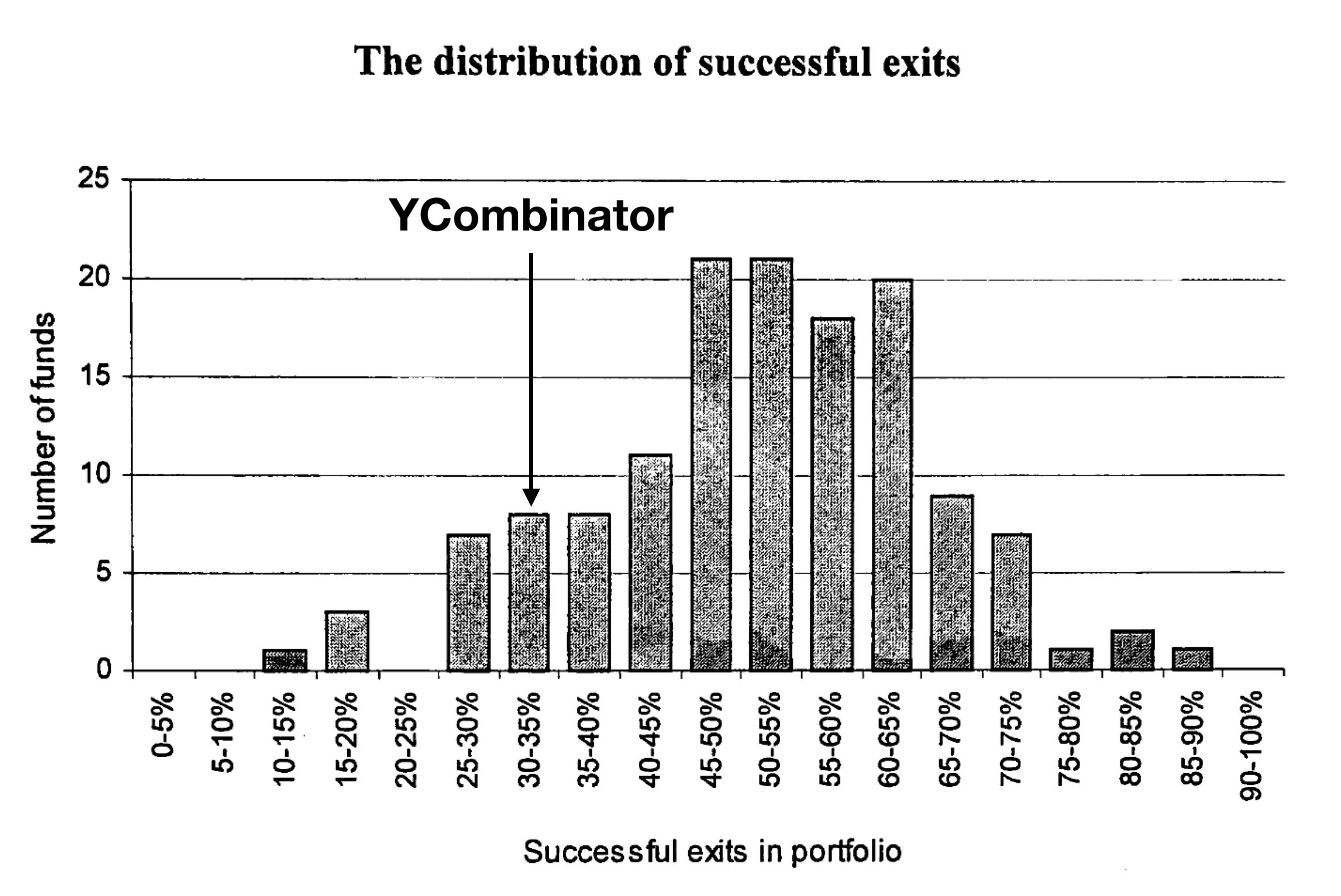 Only the original 2005 cohort achieved the industry benchmark established in the 2005 study.

Now admittedly the potential exists for this figure to rise in the next 5 years but, at the moment, the traditional Venture Capital model appears to be 1.5x more efficient at achieving an exit than the YCombinator model.


If we expand our study to include other popular incubators we discover the same pattern.

For example about 35% of the Techstars pre-2012 portfolio has exited and less than 1% has IPO'd.

Seedcamp has achieved no IPO’s to date and less than 30% of the portfolio has exited.

This suggests, when it comes to exits, the best of breed start-up incubator model sits uncomfortably within the bottom 15% of Venture Capital portfolio efficiency 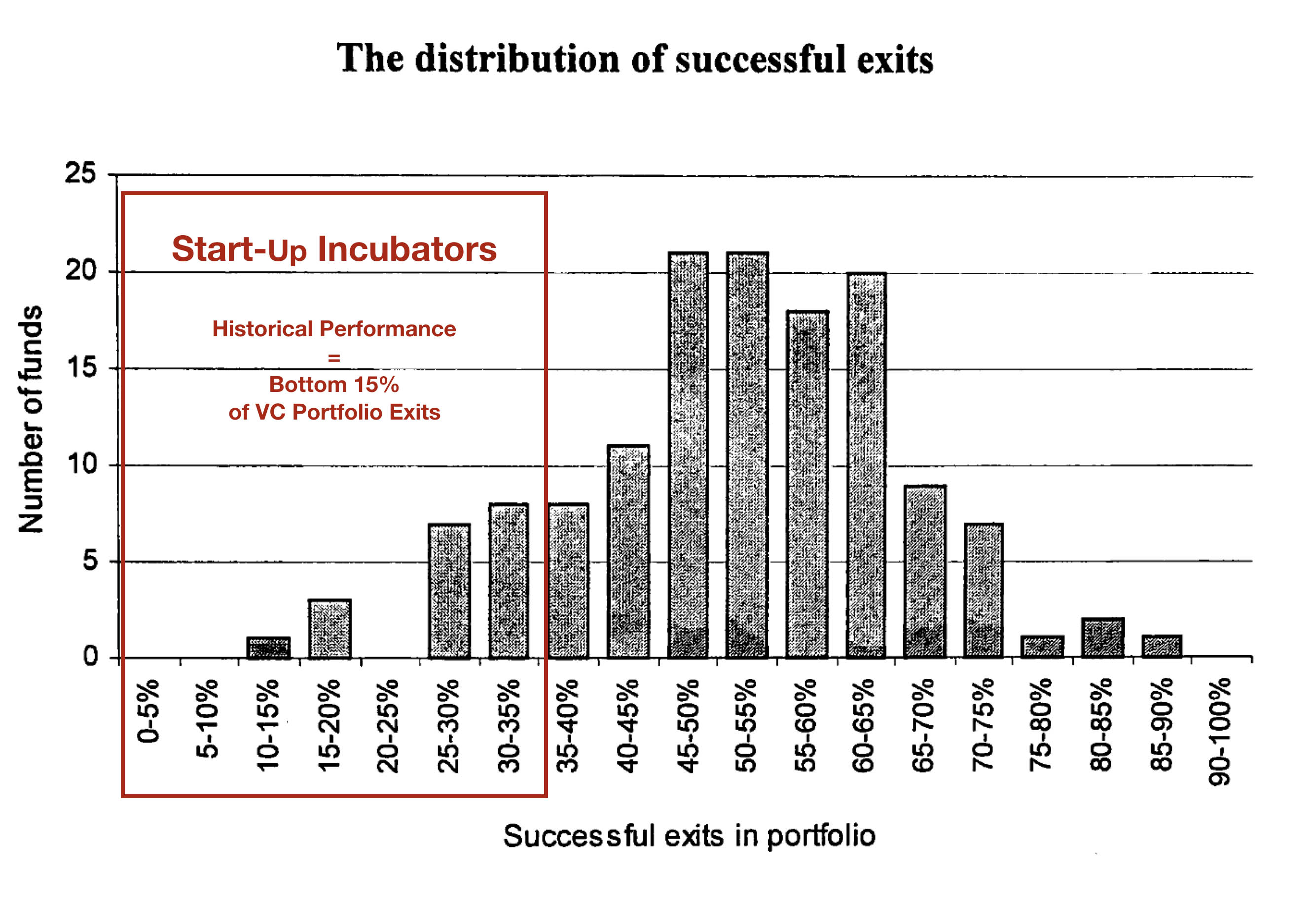 In each case the early success of the original cohort merely meeting - rather than exceeding - the historical benchmark has result in an expansion and ultimately a dilution of the quality of the incubator portfolios.

Now there is of course the opportunity for more exits in the future. But these figures have to be assessed in the context of the longest tech bull run in US history.

And we have to ask the question, given that less than 6.5% of the YCombinator portfolio has achieved an exit today, what happens to the prospects of these start-ups if and when the bull run ends?

I guess we'll know the answer to that question when we revisit the data in 5 years time. 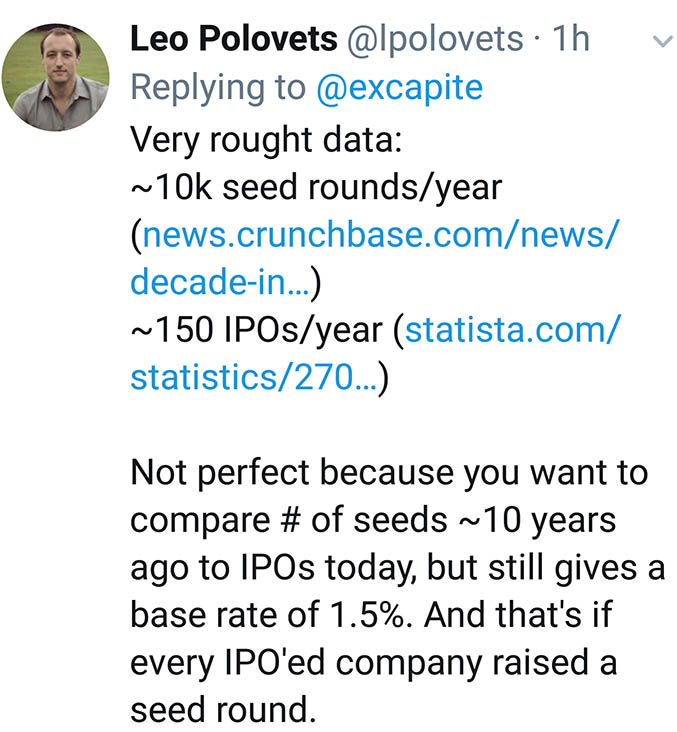 If we adjust these numbers to accomodate an 80/20 split between IPO's that received seed funding or corporate R&D backing vs. those that are bootstrapped we can estimate an industry adjusted average of 1.875% for seed exits


However, using this approach, there is no way to isolate the relative efficiency of the Seed VC model (as opposed to Angel, Corporate VC or other investors) within the market average


But if we compare the incubator/accelerator IPO exit data with this "rule of thumb" calculation we discover the market leaders still fall below the market benchmark for frequency of IPO exists. (Note: (as explained above) this may change in the future)


A closer inspection of the Founders Fund portfolio of investments prior to 2012 indicates 47% of investments have exited to date with 24% of the investments having exited by IPO. (Note: these figures appear to correlate with the numbers published by the 2005 study)


It also suggests the "rule of thumb" 1.5% average is probably skewed by the growth in startups seeded by the factory model

On $300 Billion of Y-Combinator Startup Success

It was anticipated that the collective intellgence of the venture capital community could answer the the question: Why do Startup Incubators fail to compete with pre-2000 Venture Capital investment exits?

After 18 months no correct answer has been published and so here it is... 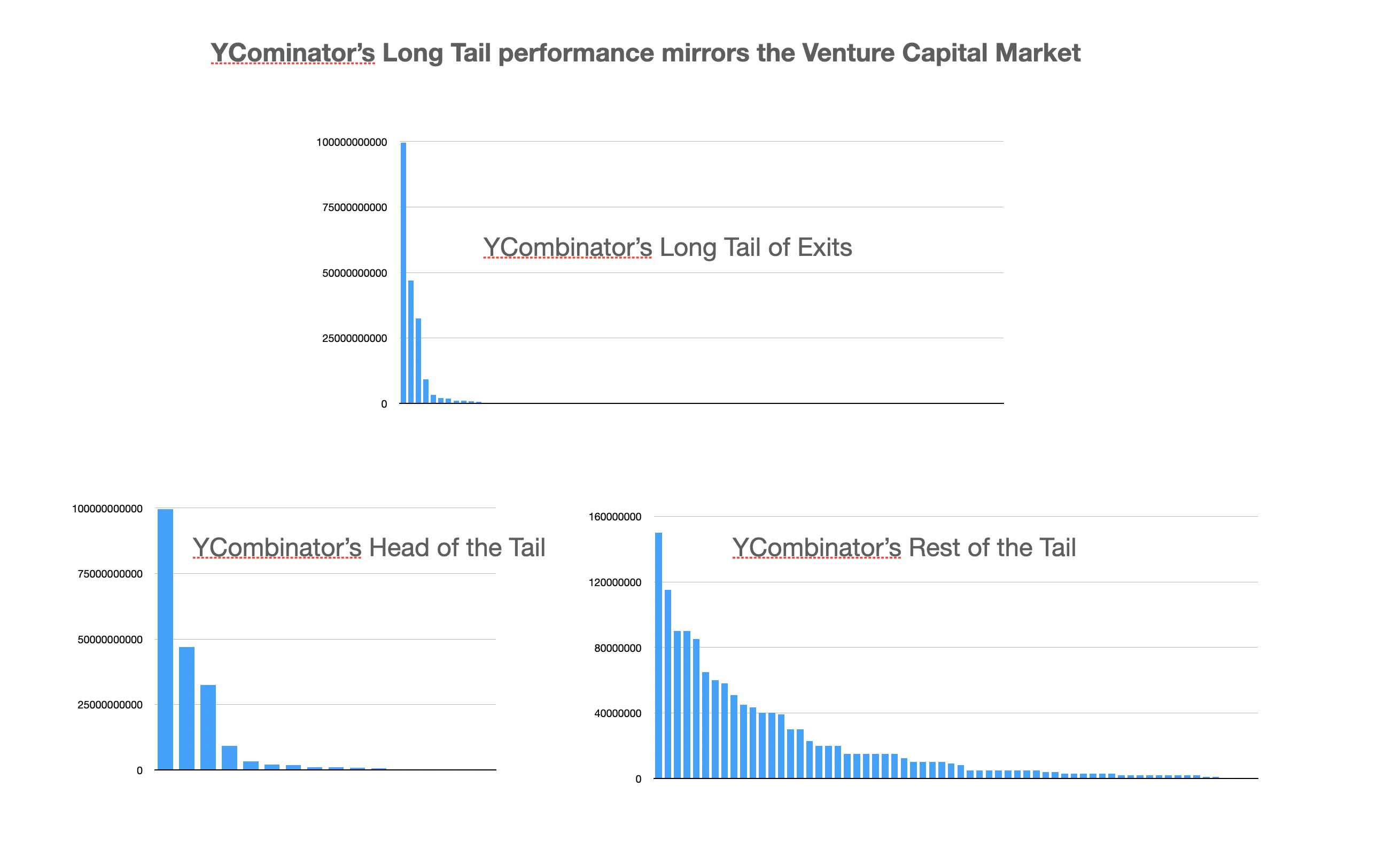 The reality is, for the startup incubator model to achieve outsized ROI, it needs to feed on outsized failure (Just like Venture Capital)

... and this explains why the exit ratio is below the pre-2000 average

Radical Insights published a summary of their analysis of 35,568 startups founded between 1990 and 2010 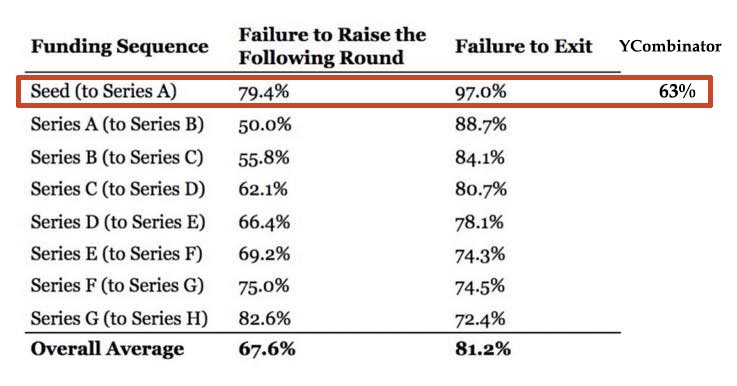 However the key number of interest within the context of the original study I undertook was the number of IPOs: 6,856


This indicates an IPO conversion rate of 19.3% across the sample


Obviously, in hindsight and with the new evidence at hand, I was wrong. It is in fact closer to 14x less efficient that traditional VC seed investing


Which, given we are now in the second decade of the longest tech boom in history, is nothing if not surprising