What can venture capital teach us about investing in innovation?

“I'd rather have lucky generals than good ones.”
- Napoleon Bonaparte

So what can the accumulated wisdom of the profession teach us about investing in innovation?

The simple answer is not much

But let’s not stop there

The deeper insight is to be found in the WHY?

Not only are their investments locked up for an extended period (i.e. illiquid)

The majority of funds fail to beat the market index 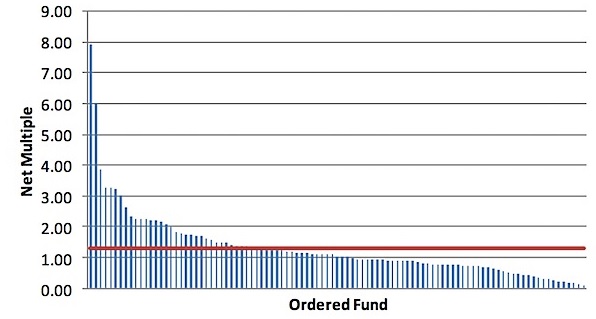 The question being WHY?

Evidence suggests the average VC has has a weak comprehension of portfolio mathematics (e.g. Power Laws, Diversification, Syndication and the Time Value of Money)

But few comprehend the probability of unearthing => 10x startup investments

Or, that VC’s who consistently out perform the NASDAQ Index are the exception. Not the rule

The probability of them repeating that feat is ~0

A Power Curve is just that. There are a handful of outsized winners at the head of the tail. The rest are losers.

This is why, even though the number of exits can be mapped to a bell curve, the averages are meaningless

Likewise those who focus exclusively on investing in seed, early, growth or late stage fail to grasp the mathematical reality of the Time Value of Money…

no stage offers an advantage over any other

and this begs the question:

Would asking VCs to head back to the classroom to learn statistics and probability or spending a weekend in Vegas at the roulette table improve their chances of picking a winner?

When the edge moves to the centre

For this to happen the VC must live on the edge

They must be where the experiments are happening

Sadly it doesn’t… and, even if it does, they lack the situational awareness to comprehend the opportunity

The lazy sit at home watching the talent shows on TV (Think: Incubators) or listening to the radio (Think: Twitter)

The winners, profiting from the latest disco fade, party the night away at the Studio 54

Outside is a line of wannabes, stretching around the block, trying to get in

Meanwhile a precious few are living life on the edge

Taking in the raw, rough vibe at CBGB. Busy signing up the bands of the New Wave

You see, when it comes to unearthing the next generation of =>10x founders, most VC’s are simply moving in the wrong circles

They suffer from network blindness

The same thing happens every day in large organisations

Innovation happens on the edge

Searching for that edge